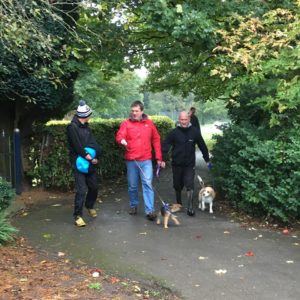 Hi once again from the side-lines of BPRC.
The pic of the week isn’t of any entrant but of three bye-standers: Jason Burgess, Richard Dodd and Nick Hulme.
All three were unable to take part for different reasons but took the time-out to come along and exercise their dogs – the Burgess mutt, Benson, had gone walkabout – and more importantly, support family members and other entrants they have come to know.
So! That’s another good point of joining the Couch to 5K program – friendship – neither of the aforementioned knew each other before they attended the events and probably most of the entrants were oblivious of each other, even in our little town.
BPRC