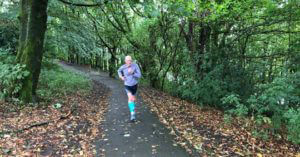 John Broadbent (v70) has always been a runner, but when he retired in 2005 he wondered if he could do something more – triathlon or even ironman?

Progressing from running to triathlon was a steep learning curve with the extra organisation, but he completed his first triathlon in Sandwell in 2006. Shortly after this success, he moved up to Olympic triathlon (1500m swim, 40K bike and 10K run) with the first being Bath in 2006.

Problems with his knees then began to complicate things and the doctors told him to give up all sport and just play “crown green bowls and a little golf”. An opinion that did not go down well with him. However, after a while spinning, swimming and biking, he found he could still run if he was a little sensible.

In 2009, he completed the Beaver Half Ironman finishing first in his age group. Then after qualifying at the Nationals, he was selected for GBR at the World Championship in New Zealand, finishing first Brit. A fantastic achievement. More recently, he competed in 2017 World Championships in Rotterdam with a more competitive field. After working on his swimming technique, he finished 4th Brit and 12th in the world.

This week’s pic of the week goes to celebrate these achievements. John has been a member of BPRC from near the beginning, regularly offering encouragement to all and marshaling. More from his fascinating story can be found here: https://www.staffsmoorlands-ac.co.uk/…/86-john-broadbent-s-….