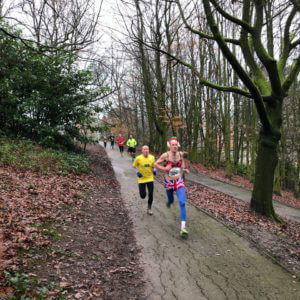 We were so pleased that many entrants, with many dressed as Santas, elves and other fancy dress attire, took part in this week’s Santa Dash. It all helped to make it one of our most enjoyable events ever. To choose a pic’ of the week is actually quite hard, but Gareth Briggs, who as you can see was dressed in somewhat more personalised attire, emphasised the fun of the event. In the front, Gareth and Jason were neck and neck before, at the last incline, Gareth suffered from ‘acute bra strap-nipple-itus’, a soreness that left Jason to take the accolade as the best santas little helper. However, Gareth’s suffering was not in vain, as he achieved a PB of 30 seconds. Hope you had a great Christmas, and be ready for tomorrow’s New Year event. BPRC.