Last week’s, belated, pic’ of the week (16/06/18) shows Ian Frewer on his way to achieving a new PB.
Ian originally came to BPRC to support his son, Daniel, who regularly takes part the 5K. After a few weeks, he decided that he could join in too and he entered the 5K himself. After starting off around the 30-minute mark, he has seen his times tumble to a new PB of 27.02.
Making friends along the way, running with Richard, Paul and Dan, he entered into a team for the Showground Relays, and competed in the same event as his son.
Ian’s story demonstrates that at BPRC, parents do not have to sit on the side-lines, but can also take part and have new experiences for themselves. BPRC.
P.S. This week, Ian’s help was gratefully called upon to assist with the timing. 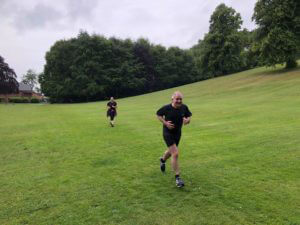