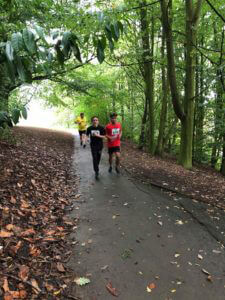 Thomas Turner (16) signed up to BPRC in July, entirely on his own, after sitting his GCSE exams. After taking part on several occasions, this week he introduced his friend Michael DeBelen (16) around the 5K course for the first time.

After all the stress of the exam period, coming to an open, friendly, not-so-competitive event like ours can only help clear the head and get some fresh air away from the desk. And bringing your friends has added bonuses too.

Now that Tom has finished his exams, we would like to congratulate him and we hope he continues to do well in the future. BPRC.

Donate to us
Toggle the Widgetbar