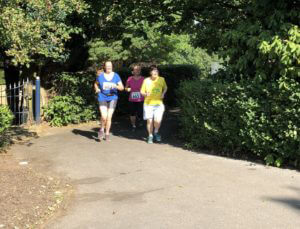 Hi once again from the side-lines of Brough Park Running Club.

The pic’ of the week for 07.07.18 goes to Mary-Jane Searles, who joined the Couch to 5K programme at the back end of 2016; on that day she made her way, by a variety of means, to the 2.2K line to record a time which was just a dozen seconds below the 20 minute mark.
Following that first event there was a lapse, then a return, and from that point the v65 has progressed onwards, obviously with the occasional missed week; knocking seconds and minutes off that inaugural marker by turning out on a regular basis.

Improved times are a bonus but, making the effort to get off of that sofa to take part is of a greater value.
What is even more uplifting, especially for someone who is making their own mark, is the willingness to take time out to welcome a couple of intrepid newcomers.
Before last week’s event she could be seen talking to two of those; perhaps reassuring them that they have made a good choice in joining the mass.
As a result she further encouraged them and showed them the route by pacing the newbie’s along their journey, and in doing so managed to take her mind off things and achieved another PB; a ninety second reduction from her previous to 14.21.

Just take stock of those statistics; over five minutes reduction over X months at the tender age of 65+.

Many others – scores of years her younger – have fallen by the way-side after one or two attempts to overcome the hill/incline; however, yet another member has stuck to the task.
The route is tough. It’s all we have!

Put your mind into gear and make progress, if at all possible; failing that just keep on attending and at least feel better for it.

We invite the fit and not-so, the young and the older person to take part in any one of our five distances.
Wishing each and everyone the very best of fortune on their journey.