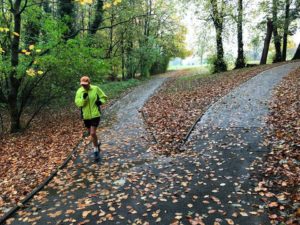 This week’s ‘Pic’ of the Week’ is an autumnal pic of Bill Mould.
Sixty-nine year old Bill started at Brough Park in September 2016. Bill has now clocked up nearly 50 total runs and his regular, sub-30 minute times make him one of our most consistent runners. Running isn’t always easy, and if you’re just getting started the first few weeks can be hard. Runners like Bill prove that with the right approach and a can-do attitude, just about anyone can become a regular runner. Here at BPRC, you can always feel like you can lean on us for advice and support to make running part of your weekly, if not daily, routine. Everyone has to start somewhere. BPRC