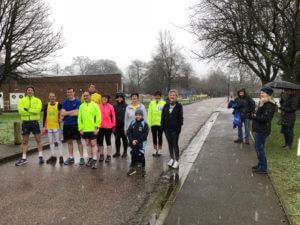 Hi, once again from the side-lines of Brough Park Couch to 5K.

Richard and Edward (Messi no 10) Dodd, vying for post-event bragging rights around the family Sunday lunch table following their epic contest; the leader, ‘brave-heart’, Isaac Elkington for not succumbing to the wintry conditions; Adam Genes for giving his all following the previous week’s injury, to out-place Karl Birch – who was no slouch on-the-day; Dawn Brown for not faltering on those 3 major inclines/hills, despite the slippery, fatigue sapping section preceding them; v65, Mary-Jane Searles for pushing on and overcoming the greasy conditions that could have thwarted her continual progress; Jamie Carney for once again carrying his water bottle full-route, even without too much, if any, post festive training in that feat; Lauren Rooke, Beverley Sloan or Alex Tommlinson, whom all ‘dug through the snow piles’ to return for a subsequent event following their inaugural week

So! From the above the choices the Pic’ isn’t anyone, it is in fact all of the 11 entrants who toed the line, along with the much appreciated staff, Rachel and Sam, for their overall efforts to turn out and make-our-day.