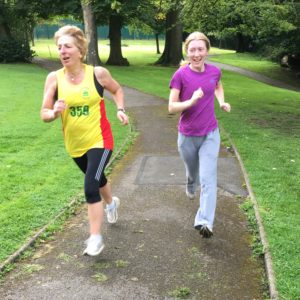 Hi, once again from the side-lines of Brough Park Couch to 5K.
The photo that has been chosen from 02/09 event is of two 5K entrants; v55 Elaine Hargreaves and Claire Deighton.
It’s a two-fold appreciation photo; firstly depicting Elaine’s efforts to build up over many weeks to gain the willpower to move up to the longest distance, and Claire’s forethought for another entrant; it was only a few weeks ago that she herself was escorted and encouraged to go that extra lap.
BPRC