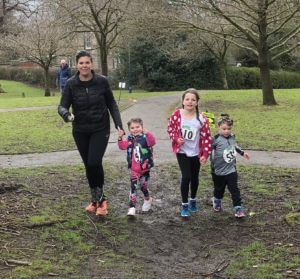 Hi, once again from the side-lines of Brough Park Couch to 5K.
The pic’ of the week from the 31/03 event goes to the Locket/Grimes contingent; one of the growing numbers of family groups.
It’s good to see their related members grow in number from the initial attendance of Gina, way back-in-the-day along with her running pal, to the vast majority of her family now attending together.
The pic’ shows Gina along with four-year-old twins Jessica and Oliver, accompanied by Evie (8); while Jack Grimes (6) and Joseph Locket (11) took part in a longer distance with Paul and James Locket completing the 5K.
Not forgetting grandpa who was following their every move in addition to emptying his wallet to pay their subs’.
Our overall aim is to get people to attend our events, no matter how fit they are, or how fitter or faster they become after ‘x’ weeks, months or years; and just as important, we encourage the old and young alike..