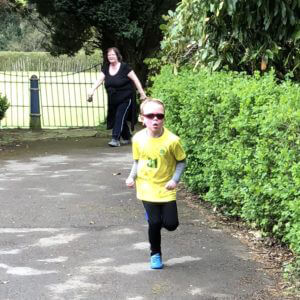 Hi, once again from the side-lines of Brough Park Couch to 5K.

The pic’ of the week from last Saturday’s event (28/04/18) goes to
Seventy-one-year-old Zena Cope, for all the right reasons.
Having only just joined our Couch to 5K event she has chalked up four, consecutive outings, after being initially invited by family and friends to take part.
On her latest training night there was a prompted-option to stay at home, sit on that couch and watch the dreary six o’clock news, as one of those friends rang her to say they felt tired and wouldn’t be attending.
That would have been an easy option; however, she chose to attend the latest training stint on her own and joined the growing number, progressing around one of the optional distances.
We invite the fit and not-so, the young and the older person to take part; wishing each and everyone the very best of fortune on their journey.
Pictured ahead of Zena is a younger member, James Burgess, three-score+ years younger.